Recently had to work on a project where the Maven codehaus axis plug was being used to generate a webservice client.

problem was everytime it built my IDE would moan about missing the generated classes, so I went searching and found this useful Build Helper plugin to help your IDE integration out.

My latest app iBoincStats has just been approved by Apple.  Releasing software (even something this small) is always a rush, it never gets old.

I decided to do an app instead of a game for a change, just to see what the interface builder, XML and "work" type development would be like. It turned out being a lot faster and simpler than I expected. I have also always been a big fan of BOINC, and checking my "stats" for many years now, all the way back before there was a BOINC platform, and it was only the SETI@Home project.
(An added bonus: unlike games this one it would actually be available on the South African App store as well as the international ones)

During my development career I have never really spent a lot of time designing and developing UIs, I always ended up on the backend side of development projects. So take the next statement in that light:
I think Apple has actually done a pretty good job (after some initial learning frustration) with their interface builder and storyboard shipped with XCode. I sat down and after a good couple of hours of struggling, something eventually clicked and it all finally came together. I restarted my project, copied over the backend code and in literally 15 minutes the storyboard and 3 UIs were done. Awesome.

I had a couple "funnies" while still using XCode 4.2, but just upgraded to 4.3 and those particular issues seem to have been corrected.


This is a simple stats client to view your BOINC project processing statistics.
Enter your cross project id and access your latest stats.
Some of the popular BOINC projects include:
Seti@home
climateprediction.net
Einstein@home
POEM@home
rosetta@home 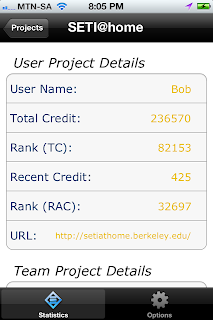 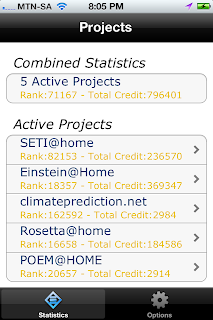