This series of posts will be about me getting to grips with JBoss Drools. The reasoning behind it is: SAP bought out my company's current rules engine and Drools is one alternative we will be looking into as soon as someone has the skills to get a proof of concept up.

Although there seems to be a fair amount of documentation, I always find it helps having walked through examples, which is what I am going to do here.Drools on first glance can be quite daunting, it is made up of :

Drools Expert (rule engine)
Being a developer this is where I will begin, the actual rules and implementation of them.

So to begin.
For part 1, I just want to get my feet wet, I download only the Eclipse plugin and the binaries

The eclipse plugin will allow you to create a Drools Project and that includes the "Drools Library", but if you are using maven you need to point to the JBoss release repo for the Drools dependencies, The KnowledgeRuntimeLoggerFactory needs XStream which you can just get from the standard maven repo. Below is my POM:


To add a rule, on src/main/rules, Right click -> New -> Other... Drools/Rule Resource, be sure to choose the "individual rule". This leaves you with an empty drl file:

To understand and use the rule language, I read the Drools Documentation and the examples project.
What actually took me a little to grasp, was the basic syntax and how objects were handled in the rules and I did struggle to find anything that actually explains it simply so I will give it a shot.

A note on variable names.. they do not need to have the '$' but it was used in the example and without it quickly gets quite confusing.


Now to step through the parts of a rule:

The package, and import keyword are self explanatory, what happens after the when is not.
What is happening in "$vo : RoolVO( stringValue == "Learning to drool", $booleanVal : booleanValue )" broken down actually is:

stringValue == "Learning to drool" - This is a constraint that allows us to find all RoolVO objects known to the knowledge base that have the getStringValue() value equals to "Learning to drool". If there are multiple instances of RoolVO that comply we will run this rule more than once, these are also referred to as matched objects. You can also have multiple constraints separated by a ",".

$booleanVal : booleanValue - We are declaring a new local variable of type boolean called $booleanVal and gets it value from isBooleanValue.

The next line:
"eval( $booleanVal )" - Evaluates the boolean variable, this needs to evaluate to true for the 'then' part of the rule to be called.
Then:
System.out.println( "First Rule" ); - Standard sys out.
$vo.setStringValue("Done."); - Sets the String value on the current RoolVO object that matched the constraints to Done.


I wrote a simple test for the rule I described earlier.


To be honest, Drools is not nearly as intuitive as Quickrules was from what I have seen in this first task. However, in Part 2, I will start looking at using the rule flows, decision table functionality as well as the guided rules: 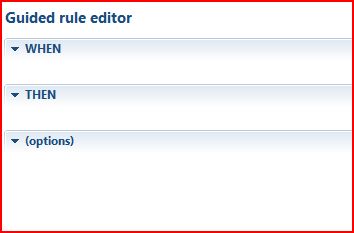 Those in partnership with the DSL (Domain Specific Language) construct hopefully do allow for more intuitive rules creation.
Posted by Brian at 7:24 AM